Amazon (AMZN -1.24%) is everywhere these days. I’m not just talking about newspaper headlines – although there are plenty of them. No, Amazon is now part of the daily life of millions of people. It’s nearly impossible to spend a typical day in America without encountering Amazon’s products, services, and infrastructure. Therefore, it’s no surprise that Amazon is one of the top five companies in the stock market.

If you’re not talking about Amazon, you’re an exception to the rule. However, this massive company also makes a lot of mistakes and unpopular decisions. Amazon chatter isn’t always positive.

So what’s everyone saying about Amazon lately? The e-commerce giant is still working on original items like the Amazon Astro home robot or the ad-supported Amazon Freevee media streaming service. Over the years, the company has built a massive presence in modern homes through the Echo line of smart speakers, the Fire brand of video streaming devices, and the Ring collection of smart home solutions. The Alexa virtual assistant software ties all of these Amazon devices together into a cohesive system.

Many people find Amazon devices useful. For example, my family wakes up every morning to the soft sound of Captain & Tennille singing “Muskrat Love” on a handful of Echo speakers around our house. Every egg we boil relies on Alexa’s handy timer function. These gadgets are sometimes useful.

At the same time, some people are concerned about the ever-there, ever-listening presence of Amazon’s digital spies in every living room and every video doorbell. The company already knows far too much about us, based on our online shopping habits. The data that Amazon populates from the Alexa network inspires even more advertising and direct selling efforts. For some, this is a deciding factor.

And whether you love Amazon’s contraptions or hate them with a passion, they provide excellent fodder for water cooler talk.

Amazon’s Prime Video service can’t quite measure up to the king of media streaming netflix in most markets, but Amazon is working hard to become a serious challenger worldwide.

For proof of the progress of this strategy, let’s look at Amazon’s results in entertainment industry award shows.

The chatter is set to continue as Amazon continues to increase budgets and marketing pushes behind its most promising shows. As a fantasy fan, I’m especially looking forward to the next one. the Lord of the Rings prequel series and at least two more seasons of Robert Jordan wheel of time epic. I don’t expect these titles to become the next ones game of thronesbut they absolutely draw attention to the Prime Video network.

Neighborhoods are talking about those ubiquitous Amazon Prime trucks

And the logistics system continues to grow. Amazon spent $152 billion on shipping and fulfillment costs in 2021, up from $78 billion in 2019. 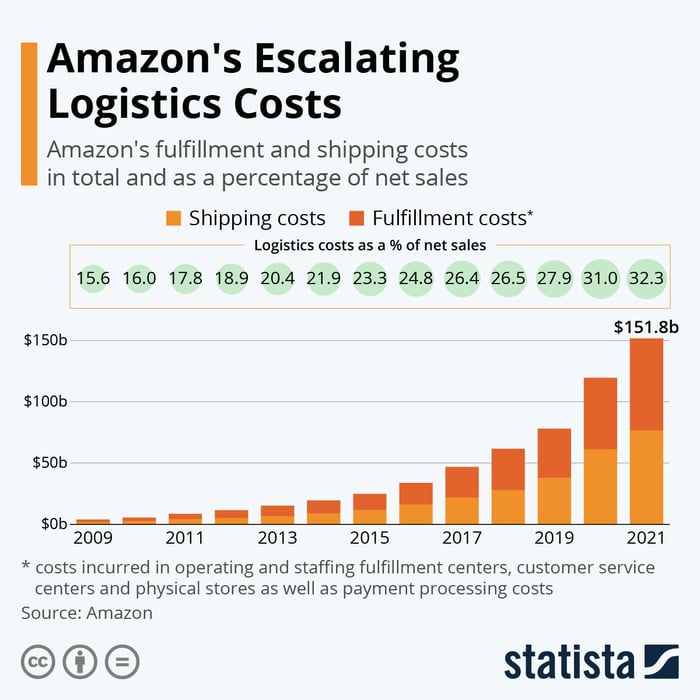 This gigantic delivery network also makes Amazon a revolutionary force in the transportation industry. The company has ordered tens of thousands of electric delivery vehicles from parent company Fiat/Chrysler Stellar for its European delivery centers. In America, the first electric delivery vehicles from Rivian took to the streets just a few weeks ago. Stellantis vehicles are part of a multi-year partnership, and Amazon has committed to ordering 100,000 Rivian vans by 2030.

If the sheer volume of Amazon Prime delivery vans wasn’t already the talk of the town, Prime’s huge fleet of electric vans would undoubtedly do the trick.

With 1.5 million employees and countless legions of contractors, Amazon is one of the largest employers in the world. Many workers in the fulfillment and delivery system attempt to organize into unions, hoping to negotiate better terms of employment through a collective bargaining agreement. Amazon does not support this idea at all, taking steps to break off union negotiations and defeat worker votes on this issue.

However, Amazon is being dragged into unionized labor relations by kicking and screaming. The first Amazon union was established in Italy in 2018, followed by many others across the union-friendly continent of Europe. Strikes and walkouts are not uncommon at Amazon’s fulfillment centers in Germany, Poland and France.

American workers are trying to follow suit. Organizing votes have created official worker groups in New York and Seattle, and the Teamsters union has pledged to help Amazon’s workforce organize.

It’s unclear how far the organizing drive will go or how far labor groups will help Amazon workers, but the process is underway. Things are happening and people are talking.

I would be remiss not to mention that Amazon tends to deliver fantastic shopping results in almost any market environment. Revenue has tripled in five years, and Amazon’s earnings before interest, taxes, depreciation, and amortization (EBITDA) have been $50.7 billion in the past four quarters.

Amazon’s quarterly results don’t always match Wall Street’s consensus estimates, but the long-term, soaring trend is clear. Amazon is a mature giant that continues to grow like a hungry upstart anyway. I’m not making a quick observation here – it’s a real thing. Amazon founder Jeff Bezos calls every day “Day 1 for the internet and […] for Amazon.com.”

As a result, the company continues to grow at breakneck speed and the stock has returned 1,100% to investors over the past decade. It’s a growth stock with the massive financial platform of a fully mature blue chip titan. It’s definitely something to talk about.

The Best Ways To Easily Get Money Fast